Hitler, and the opportunity to rewrite history 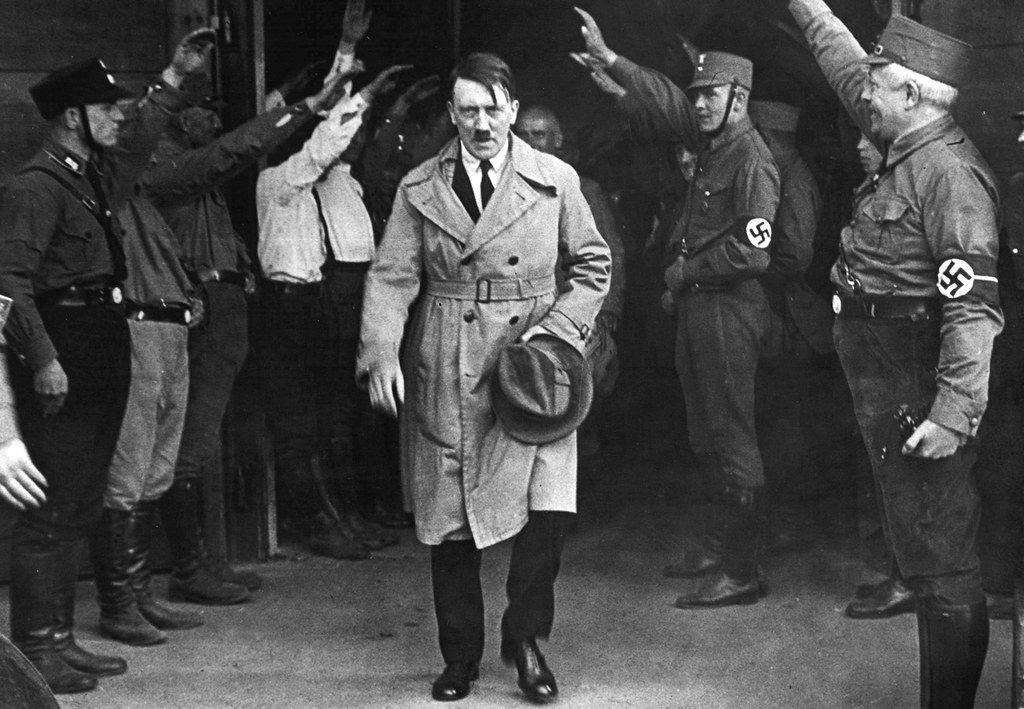 Setting Hitler straight? I think there’s a fair few people who would like to have had that opportunity. This opening is certainly intriguing. Does it work?

Title: The Wolf’s Lair
Wordcount: 64,246
Genre: Historical
Language: British English
Synopsis: John Ryan, a history graduate is approached by a mysterious German figure, Doctor Ralf Hoitdle offering him information about his Grandfather during World War Two and how they had worked on incredible new technology that could change the world as we know it forever. Is Hoitdle friend or foe?

Text: “Nein, Nein, Nein” was the repeating blast I was becoming all too familiar with.
“Sie sind ein lungner und ein feind vom Vaterland”, I was a liar and an enemy of the Fatherland.
“Ich werde dich rausholen und erschieben lasen, wenn noch ein Wort aus deinem tuckischen Mund kommt” I gulped as the translator spoke the words I had been expecting for the past hour.
“I will have you taken out and shot, if one more word comes out of your treacherous mouth”

The cold, damp musty scent in this badly lit room I stood in had long since bothered me. I wondered whether I had made a huge mistake. It was an opportunity way beyond what I had ever dreamt possible in my wildest fantasies to be standing here right now. I had always been fascinated by the histories of World War Two. As a kid growing up, I watched scores of old, World War Two movies and then re-enacted them with my ever-growing collection of toy soldiers re-enacting the manoeuvres, the battles and working out how I would have done things differently. I remember as a schoolboy hating most school studies but when I got my first secondary school history book and seeing those old black and white pictures of the battlefields and magnificent shots of panzer divisions squaring off against the mighty T34 tanks of the Russian Red Army, my imagination would drift into overdrive as I imagined who would come out on top. The stories of how and why decisive battles where won and lost.
I pondered the disastrous decisions of those Panzer Division commanders trying to use the blitzkrieg manoeuvres through the heavy Forrest areas of the Ardennes with fuel so scarce for tanks during the battle of the Bulge. The Blitzkrieg relied on fast moving armoured divisions backed up by the hard, fierce fighting and loyal Waffen SS, with air support from the German Luftwaffe. Or maybe the German tank commanders already knew it was a mistake, but their objections fell on deaf ears. Hitler gambled and lost. At that stage of the war Germany was hanging on by a tread. “The Battle of the bulge” as one newspaper named it was the last great hope of Hitler to halt the advancing American and British armed forces. The last chance for the third Reich to hold the allies back and split the English – American troops and then hope for a peace pact to give the German army time to rebuild, rearm and turn their attention to the East and Russia. But the cold harsh conditions of the Ardennes, the narrow muddy roads and hillsides, slowed the counter offensive of the Germany army. Small pockets of successes were achieved by some German commanders but throughout the offensive named “Unternehmen Wacht am Rhein” translated as “Watch on the Rhine” the main battle was lost, doomed from the start, forcing the Germans back into a defensive position and back deep into Germany. Back home towards Berlin.

So here I was, incredible as it may sound, standing in the Wolfsschanze or as we in the English-speaking world know it, the Wolf’s Lair.

29th June 1941, six days after Hitler arrived there, I was in the Headquarters for operation Barbarossa the German invasion of the Soviet Union. Eight Kilometers from the small Eastern Prussian town of Rastenburg and in the middle of the Masurian woods. Today it is known as Gierloz, Ketrzyn, Poland.

“I am not lying and if you do not listen to what I have to say you will be remembered in history as the most hated, vile and evil leader that ever existed. This I can assure you.” I blasted back. The German translator sweating somewhat and standing still with awkward hands waited for us to speak in turn. “You will lose this war and you will lose it disastrously. I can help you win and change your destiny. The way it should have been”. I could hardly believe the words coming from my own mouth.
Rounding from his large paper filled wooden desk, he approached and stood two feet away from me and turned his head up to meet mine. His cold eyes buried deep into mine and he held his gaze for what felt like an eternity. Two SS Guards stood alert and watched with readiness in case I tried to harm their leader.
Yes. Adolf Hitler was standing in front of me and piercing me with his overpowering glare.
I struggled to stay calm but held firm. Finally, he turned and ordered his guards out. They hesitated. “Steigen Sie Aus, Steigen Sie Aus”, “Get out, get out”. The guards looked at each other and took one last warning stare at me. Turning back towards their leader they clicked their obedient heels and roared, “Heil Hitler”, Then quickly exited the room, closing the bunker door behind.
His Interrupter stayed to translate. He as a small stout man with chubby fingers and chubby cheeks. He stood awkwardly when spoken to as if fearing making a mistake. His uniform didn’t fit him well and I doubt the medals on his SS shirt were ever earned in battle. But apart from this puppet, here I was alone in a bunker with arguably the most hated man in history, trying to persuade this dictator what had cost him the war. The mistakes he had made.
The stupid and vanity driven decisions that destroyed his dreams for a greater and supreme Germany. His thousand-year Reich.

But why you want to know? Why and how?
Why would anyone, albeit a Nazi loving, Hitler fanatic, Jew-hating redneck want to help Adolf Hitler. The man who oversaw the extermination of six million Jews. The man who brought war and destruction to Europe resulting in the deaths of tens of millions of soldiers and civilians.
But more incredibly. How?
How was I able to stand here in East Prussia, June 1941 with the Furher of Germany when I was born January 29th, 1978 in Dublin, Ireland? I was a twenty-five-year-old Irish man from a normal working-class family and yet here I was.
Well, I guess I better go back to the very beginning.

Editorial comment: Well, it’s certainly an interesting premise! Stephen King did something similar back in 2011. In his book entitled 11/22/63, he posed the question, “What would happen if you could go back in time and alter the course of history?” In his book (the main premise being the prevention of the assassination of Kennedy) it didn’t end well. There have been a number of recent books and films on the subject of time-travel (The Butterfly Effect, About Time, for example) most of which have reiterated this idea—mess with time, and it has many unintended consequences.
Given the contentious nature of the subject matter, I think you would have to be explicitly clear that the story of the book is not “trying to persuade this dictator what had cost him the war”, but trying to save Hitler’s victims from the course of the actions he pursued. Unfortunately that doesn’t come across in this book’s opening. From this opening, the book seems to be saying that Hitler’s main flaw was his military prowess, or lack of it. Clearly that wasn’t Hitler’s main flaw, and I’m sure that’s not the theme of your book, but that’s how it comes across.
Again, because of the incendiary nature of the premise, you have to be utterly clear which side of history you are actually on, and the language is slightly ambiguous in places. He talks about the “wildest fantasies” of being in his current situation, the “magnificent” Panzer divisions, the “loyal” Waffen SS (who as the military arm of the Nazi party were singled out at the Nuremberg Trials as being responsible for many of the war crimes atrocities associated with the Nazis). The impact of the key rhetorical question you ask, “Why would anyone, albeit a Nazi loving, Hitler fanatic, Jew-hating redneck want to help Adolf Hitler?” is spoiled because you say “albeit”, which means “though”. So the sentence reads “Why would anyone, even though they’re a Nazi loving, Hitler fanatic, Jew-hating redneck, want to help Adolf Hitler?” So is the narrator a Nazi-loving Hitler fanatic? Surely not? I think you need to make it far more clear that this character is not a Nazi apologist masquerading as a historian.
It’s not often I have to digress for so long about the actual theme of the book, but let’s leave that behind us now. In terms of the actual opening, does it work?
I’m not sure about the long German sentences. What’s the point, since they then have to be translated in their entirety in order for us non-German speakers to get what’s being said? Perhaps just have a brief expostulation in German, “Nein, nein, nein” which we are able to understand, to set the tone, then carry on in English? Just because Hitler speaks German doesn’t mean you have to render his sentences in that language. All we have to know is what the character in the scene is thinking/understanding, not literally what words are spoken at them.
After that piece of dialogue, there follows a lengthy piece of exposition about tank tactics in the Ardennes, toy soldiers and the Battle of the Bulge. It’s all quite interesting to me personally, but I can’t honestly say that it’s good writing. You are leaving the interrogation scene in the middle of a life-or-death argument, and allowing any tension you could have built up to completely drain away as we learn what the narrator character did in his childhood.
When you come back to the moment, it’s narrator talking directly to the reader, “This is what the situation was. There I stood in the Wolf’s Lair”. That’s pure telling, and not showing. It’s generally better to put readers in the position your characters are in and let them work out what is going on for themselves, than tell them so explicitly what’s happening. In films or theatre, this kind of addressing the audience directly is often called “breaking the fourth wall”. It’s very stylised, and can be used to great effect (for example in the TV series “Fleabag”), but it is extremely noticeable, and in writing serves to constantly remind readers that they’re reading a book.

or publishers, but I think the bigger issues are making sure that the premise of the story is “morally” watertight, and considering whether instead of this very stylised narrative structure (“There I was; can you believe it? Adolf Hitler staring at me with his beady little eyes. How did this happen to a 25-year-old Dub, I hear you ask?”), you redraft in a more naturalistic tone, which means leaving out the “asides to reader” and chunks of exposition, and instead respect the narrative integrity of the scene you are describing.

But thanks for posting. It certainly made me think!