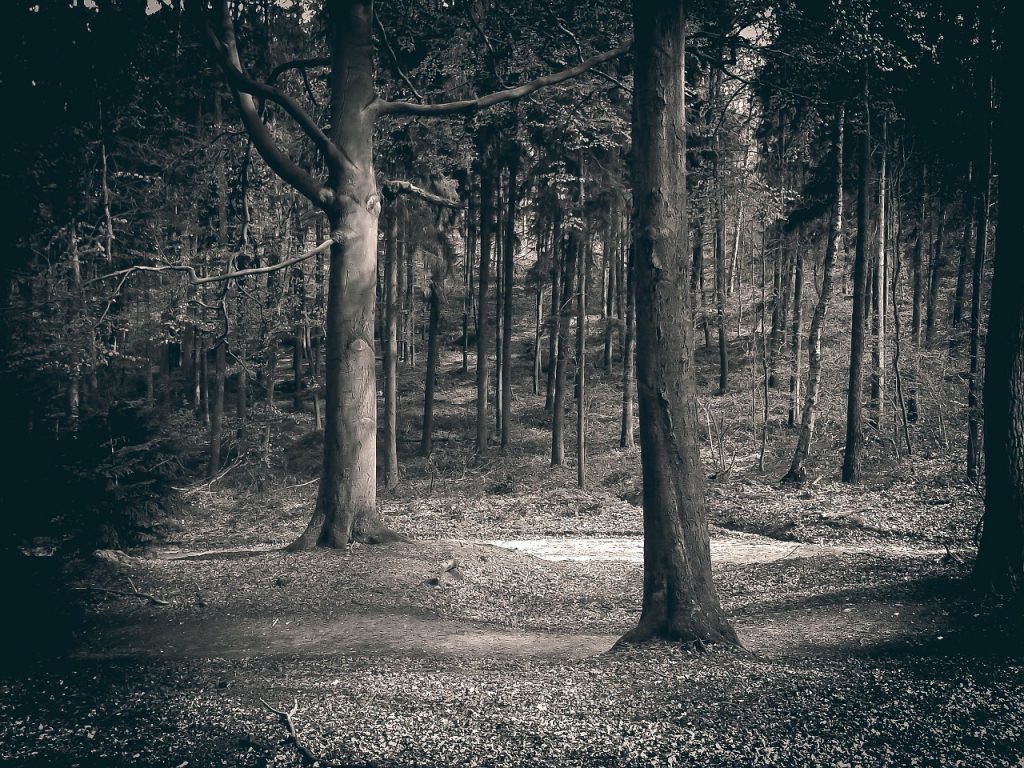 Is this “fairy story” opening to a set of short stories for small children suitable for the intended audience?

One day, Arya and her little sister Maya,were sitting on the grass playing and talking, and they both
felt that they wanted a new friend to play with. Suddenly the wind blew, and they heard a voice
saying, “go into the woods.” So off they went, holding hands, down a long path that had many
beautiful flowers on each side, and the air was filled with their scent. Soon they came to the woods.
The trees were so tall and close that the sun could hardly penetrate, but it wasn’t cold. They
followed a narrow path that led to a clearing, where there was a chuckling stream. So they sat
quietly and waited. After a while they heard the sound of leaves being trodden on and branches
moving. It was something coming towards them. They held hands and cuddled each other because
they were a bit frightened. But to their surprise and joy, a beautiful blue horse appeared and bowed
its head to them. And then, even more to their surprise, it spoke to them! “Do not be afraid, I have
been sent to help you find your new friend.” The blue horse then knelt down and bent its back legs,
saying, “Climb on my back and I will take you to the centre of the wood where all kinds of seeds
are sown and bring forth fruits.”

I’ve cut this submission off short. The sentiment of the synopsis is laudable, and you mention that the series is inspired by a love of reading to your own children and grandchildren. However, when writing for small children you really have to understand the genre. It’s much more difficult writing for small children than it is for adults, and many aspiring writers are unaware of this. The problems with this submission are stark and unavoidable.
Firstly, consider what you are telling small children it is okay to do – what message are you giving them? The two friends are sitting on the grass playing and talking. In most children’s experience (if they’re lucky), that equates to sitting on the lawn in the back garden, or perhaps in a local park. They decide they want a new friend to play with, and “a voice” tells them to wander off into the woods, unaccompanied, where the trees are “so tall and close that the sun could hardly penetrate” (i.e. dark). Now I’ve put it that bluntly, I hope you can see why very few parents, or teachers, would feel comfortable reading this story aloud to the small and impressionable children in their care. You really do have to think about what your story is telling its intended audience. Reading a book to small children is part of the process of educating them, teaching them about the world they live in and how they should interact with it. One doesn’t need to be paranoid and see a paedophile behind every bush to understand that small chldren wandering off into the woods on their own, telling no-one where they’re going and with no adult supervision is just a bad idea. They could simply get lost, or fall over and injure themselves.
So hang on, you might say. How is this different from a traditional “fairy story” like Hansel and Gretel? Partly to do with presentation. There’s nothing in the opening few lines to tell children that this is a fairy story. There’s no “once upon a time” to alert children that the normal rules are suspended – there are just two friends sitting on the grass.  Also, think about what happens to Hansel and Gretel? They “meet a new friend”, sure, one who imprisons them and wants to eat them. These stories had a clear educational function: don’t wander off into the woods on your own, or bad stuff will happen.
The second problem is the language you use which is far too advanced and/or archaic for small children, things like “where all kinds of seeds are sown and bring forth fruits” (there are other examples later in the submission). Too many sentences like this and five-year-old eyes are going to be glazing over.

Having received this or a similar critique from an editor, the reply from many authors who write for children is that “my own children loved it”. I’m

afraid that isn’t any guide. They might be too intimidated or too sensitive to your feelings to feel free to say that your story sucks and they’d “rather read The Gruffalo for the millionth time, thanks”. If you want a true test, ask to read your story to a classroom of children in a school, and see what they make of it. Unfortunately I’m afraid I very much doubt that, having read this particular opening themselves, the teachers would agree to the idea.