Confidence in your ability 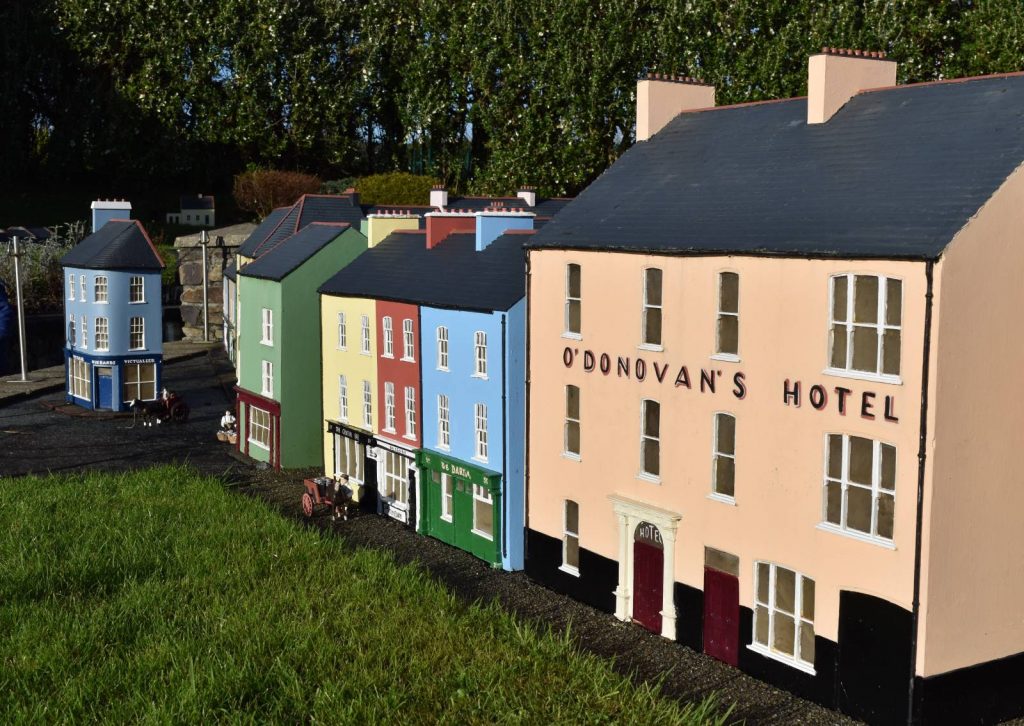 In order to tell a story, from somewhere you have to have faith that you have the ability to tell it. This is hard, for some authors. There’s a sense of being “an impostor”. “I’m not really good enough to be a writer – my story isn’t good enough”. It’s putting yourself out there, making yourself vulnerable to rejection, to dismissal. You have to get over that, unfortunately. How might this lack of confidence as a writer manifest itself?

Title: Divided We Stand
Wordcount: 88,200
Genre: Humour
Language: British English
Synopsis: The story is based on a village in Western Ireland.There are two pubs in the village.The owners of one of the pubs who are two spinsters do not speak to the owner of the other.He has just returned from America.The mystery is why.He could never understand the reason why.

Text: As Molly Mc Ginley parked her car outside the pub she co owned with her sister Peggy, she felt a great sense of relief. It was the last time that she would undertake the long and hazardous journey from Dublin on a Friday evening to work in the bar. Her transfer from the Department of finance in Dublin to the more somber Department of Social Welfare in Letterbeg had gone through some weeks earlier. She had worked in Dublin for almost a year, and although sad to be leaving her friends and co workers, the lure of her own village of Monmore could not be resisted. As she entered the bar that day her sister Peggy was waiting to greet her and welcome her home. Both sisters had a very close bond and they shared almost everything with each other.

”Welcome home sis. I am so glad that you are home safely. No more long driving to and from Dublin each weekend for you anymore. At long last we can start our plans to develop this business now that you are home full time.”

Molly was just delighted that a somewhat difficult phase in her life was completed. It had been a difficult year for her working in Dublin and travelling home to Monmore most weekends. In spite of that she had met a wonderful man who would become her partner for life. That man was Mick O’Shea.

”I ‘m so happy to be home for good. I’m also delighted to be back living among my neighbours and friends once again.”Molly replied, as she took off her coat before heading to the bar to greet her customers.

The village of Monmore was a short drive of over a half an hour from the town of Letterbeg. It was a small village of a few hundred inhabitants, most of whose adults lived on Social Security. There was little or no employment in the village other than the pubs and a small chipper that opened for a few hours each evening. Above the chipper was the only Bed and Breakfast in the village, and the beds here were normally empty. There was little to take anyone to Monmore, and nothing to keep you there. It was a sleepy sort of place, set in a deep hollow in the mountains. Yet Monmore had character and charm, and a mysterious air about it that the people of the village could not resist. Most of the people who left Monmore in search of work, returned to live in the village later in their lives.

Some of the younger population worked in bars and restaurant in nearby Letterbeg. There was also a Government Department in the town in later years. Many returned from Dublin and other large cities to work here. However most of those who were fortunate enough to get a third level education with a professional qualification were working elsewhere.

There were two pubs in the village, situated opposite each other on the main street; the only street. They were only a short stone’s throw from each other, but the owners of both pubs were miles apart in terms of friendship, and respect for one another. Mc Ginley’s bar was run by two spinster sisters, namely Molly and Peggy. This was an old fashioned style pub, most of whose clients were middle aged or retired men who had worked for the council, or were on the dole, and never worked a day in their lives.

There was always great banter to be had here, especially on dole day when the locals collected their Social Security. Many stories were told and jokes cracked. Peggy and Molly were usually at the butt of most of the slagging. One day while bending down to put turf on the fire Molly gave a great view of her entire posterior to those present. Black Paddy, a regular in the” Liars Corner”, the area of the pub where the regulars congregated, commented sarcastically.

“Jesus Molly that’s a fine pair of legs you have. I suppose they go all the way up. Did you ever get a wee bit?”Paddy was well aware that Molly had a man in her life and knew the facts of life very well.

Molly slowly turned around and walked over to Paddy with a smirk on her face, put her hand on his shoulder and said “My dear Paddy, can you talk about nothing else but sex? I’ll let you know that Molly McGinley will not die wondering, and well you know that. There you are with a wee thing hanging between your legs, and you wouldn’t know what to do with it. Will we call it” Paddy’s redundant Dick?”There was a loud cheer in the bar and much laughter, as Paddy in his embarrassment turned to his whiskey to hide his blushes.

On the other side of the street was Teach John Beag.This establishment was much more modern and was frequented by a much ‎younger clientele. John Beag Coyle was a single man in his mid forties. He was a feisty type of character who liked the good times. He had a mind of his own, and once he made a decision he wasn’t for turning. John was a very intelligent man and secured a degree in Philosophy from Trinity College, before heading to the United States. He never used his degree to obtain any sort of employment in the states, as he was of the opinion that there were easier ways of making money. John had been in many relationships with the most beautiful of women, but he never got the marriage bug, unlike many of those whom he dated. Despite that John Beag was a horny devil who would walk to the end of the earth for good shag.

He had returned from New York on his bi-annual holiday a number of months earlier. John loved his visit’s home and rarely a day would pass that he wouldn’t visit his parent’s grave.

Editorial comment: I might be barking up the wrong tree about the confidence issue, of course, but the first thing that struck me about this opening was its repetitive nature. You say the same thing no less than three times in the first few paragraphs, and it’s as if you haven’t the confidence to believe that your reader has picked up on the message the first time, so you repeat it a couple of times, with a slightly different word order. Go back and read the first couple of paragraphs again. Do you see it, now I’ve mentioned it? The phrase is, of course, Molly thinking, “It was the last time that she would undertake the long and hazardous journey from Dublin on a Friday evening to work in the bar”. What does Peggy say as soon as Molly walks in? “No more long driving to and from Dublin each weekend for you anymore.” And then Molly again, thinking to herself; “It had been a difficult year for her working in Dublin and travelling home to Monmore most weekends.” Needless to say you don’t need to repeat this information three times, and certainly not at the very beginning of your story, where it’s taking up valuable real estate that could be getting the tale going.
The truth is that readers need very few hints before they’re off following your story. More often than not, less is more. Give the reader a hint, and then leave them to make up their own minds about what’s going on. The very act of working out for themselves what you mean will automatically get them more involved in the story. So here, instead of stating “It was the last time that she would undertake …”, have Molly pulling up outside the pub, getting out of the car, looking around her. Perhaps she takes a deep breath of country air; perhaps she marvels at the quiet “after the bustle of the city”, stretches her aching back. Then, when she goes inside, instead of her sister saying “No more long driving to and from Dublin each weekend…” Peggy says, “Oh, here already, Molly? That’s lovely. You made good time. Did they let you leave early on your last day?” “Yes, thank God. It meant I could get away before the rush hour – made such a difference to the drive. Only four hours instead of five.” “Oh well, you won’t need to worry about that any more…” etc. Do you see what’s happened here? All of the same information has been passed on. She’s left a job in the city for the last time. The city was presumably Dublin, because it’s at least four hours drive away and suffers from a congested rush hour. The place she’s arrived in is remote and in the country. But we haven’t been directly told any of this. We’ve pieced it together from what has been said, in what is perhaps more realistic dialogue than Peggy’s rather stilted original lines. All this falls under the “show not tell” mantra, which is, again, that a reader doesn’t need to be told exactly what is going on. They’re much more likely to be getting immersed in the story if they have had to think about the implications of the words they’re seeing, rather than be told outright what’s going on.
Peggy’s speech to Molly when she comes in is a good example of what’s known as “Maid and Butler” dialogue, when a character tells another character something that both characters know, with the sole purpose of informing us, the reader. Would Peggy actually say those words to Molly as she comes in the door after a four hour drive? I doubt it. It would probably be “Oh, there you are. The kettle’s just boiled”.

The premise of this story is excellent. It might sound absurd, but the most bitter of feuds in country villages is often between the closest neighbours—the situation is ripe for humour, or tragedy. I think an agent, or a modern reader, would want to see a much closer point of view though, less “telling” and more “showing”, and perhaps a less narrated style. That is a matter of taste, however—there’s nothing wrong with an omniscient viewpoint, although it’s hard to do well. But do check for redundancy—where you’ve already said something and you’re repeating it in another guise.

No Comments
Categories : Every word must count, Humour, Rejected, Show not tell
Tags : confidence, show not tell
Next Page »
The Opening Lines
Copyright © 2022 All Rights Reserved. Website run by Editorial.ie