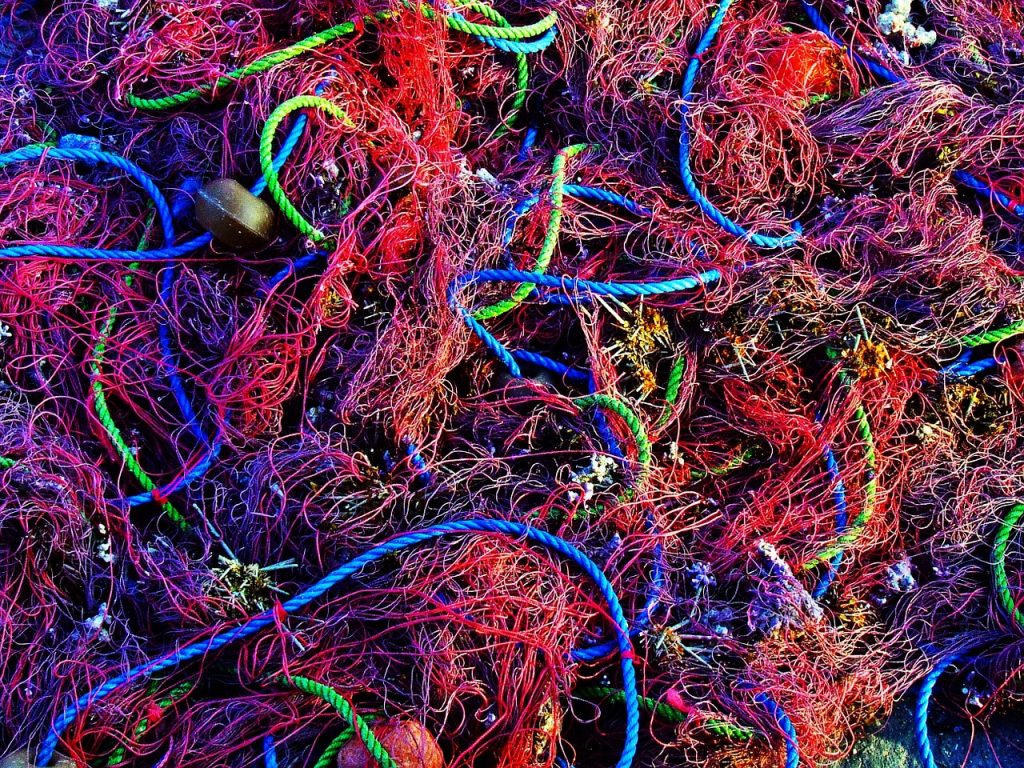 Nets in tangles: Fishermen hunched over a fire, mending their nets in this opening scene. But there’s a woman here, apparently in danger of drowning, and an unknown observer, who seems to do nothing. What’s going on?

Text: Icy ripples licked the stone ledge where she lay. Soon to entomb her unless someone recognized her plight. Music rising like a chant in that empty night drew him there. He hopped a boulder and surveyed the scene below. Smoke billowed near two smelt fishermen. One fried the catch, the other squatted on a cooler and tended the nets. Into the haze, he descended. A step from the edge: squat, reach, anchor into inclined push-ups sinking and rising with the waves. On the last monolith, a shaft of light from their lantern found her face under his. Her smile sparkled in dancing shadows. Their music’s refrain ‘Why go it alone?’ mocked her predicament. The seated guy’s belly juddered with the beat. A tiny handbag framed her photo like a painting. Still in the prone position, he seized its cord and tucked it away in his waistband as he stood. A burning plastic bag drifted over dark water. The men yelped like kids on a roller coaster. More flaming tumbleweeds went aloft. Slipping eye glasses made it all blurry for an instant. To the north, a dark figure hurried up the amphitheater rows as if fleeing. The raucous scene distracted him from another spectator back at the top. The bulky figure vanished in silence. With ballpoint in hand, he crept back up. At the second-to-last step, he duckwalked further down from the spot where the onlooker appeared. On the park road, snow flurries swirled in the headlights. A short man got in the car. Opening the door revealed his complexion: dark. The driver’s chalky. ‘Cops or queers?’ The car edged forward grinding salt as it went. A sudden braking highlighted the four-ring Audi emblem which disappeared as it sped off to the Foster exit. The faint swish of tires dissolved into chawmp-chawmping from the water’s edge. Over snow crunchy as Styrofoam, he trudged back across a dark field toward distant high-rises facing the lake. The lakefront at night came in a close second to a CTA ride when it came to cheap laughs. One last breath of fresh air before work. His heavy oxfords smashed ice chips on the walkway to the Lake Shore Drive underpass. Over fresh snow, nickel-sized holes punctuated the way out. A faint heart-shaped imprint preceded the dots. Not from a coyote’s paws. Too long a stride. High heels? Her steps shortened until they became barefoot tracks of a runner ending abruptly at the slushy entrance of the tunnel where dim fluorescent lights flickered. His face burned with recognition. It wasn’t a museum reverie. Unsought revelations awaited. Addict, prostitute, chic fisherchick, what was she? Her pursuers could make a U-turn trapping him at the exit. He secured the find and ran through the tunnel with heavy steps echoing on damp pavement. No one waited. Just lake breezes rebounding off the buildings enclosing Uptown. Another night to live and sleuth. His abdomen expanded and a quick contraction of his stomach followed. In the slow expulsion of air from the back of his throat came a muttered: “nawdaneshin.”

Editorial comment: I’ve cut this off here, because the points I need to make are amply illustrated in this paragraph.
The first problem we come across is point of view. Point of view—who is actually telling the story—needs to be consistent. If it jumps from one character to another without any kind of break in the narrative, you risk a) losing your readers—they simply won’t be able to follow who is doing what and b) losing your readers’ interest—they won’t try and struggle to work out who is doing what because they haven’t been given time to “bed down” with any particular character, so they won’t care. It’s beyond the scope of this site to go in to too much depth about PoV in general but this particular problem, of jumping from one PoV to another, is quite common, and usually termed “head-hopping”. What am I talking about?
The first two sentences (which should be a single sentence, with a comma after lay instead of a period) appear to be from the perspective of a woman, possibly injured or trapped—we don’t know yet—hoping for rescue. The next sentence, without even a paragraph break, is from a completely different perspective, that of a man looking down from above. We were thinking about the woman, but now we leave her, chained to a rock with the tide coming in or whatever she’s doing, and jump to someone else. We have no idea of the connection between these two people, if indeed there is one.
So we’ve been wrenched away from the girl.  We try and forget about her and now follow the man. There are lots of descriptive passages about what he is seeing, what he is doing. (“In that empty night” seems a misnomer, because there seems to be a lot going on, music, a couple of men frying fish on a fire, mending their nets.) “Into the haze” he descends. This threw me. What “haze”? He’s been looking down on the scene from above without any difficulty. Is it the haze from the fire? Perhaps just say “smoke” then, because haze seems to imply some other kind of atmospheric condition.
I’m afraid I’m lost completely with the next sentence “A step from the edge: squat, reach, anchor into inclined push-ups sinking and rising with the waves.” I just simply don’t know what this sentence means. It’s some kind of movement being described, obviously, but “anchor into inclined push-ups”? I don’t know. I can’t visualize what this means. Someone doing push-ups on a beach, in and out of the surf? Why would anyone do that?
In the next sentence, the woman appears again, or does she? I don’t know what “the last monolith” is referring to. Some kind of rock, slab of concrete? Why is it important? But anyway, a glimmer of light from “their” lantern (not previously mentioned) finds her face and lights up her “smile”. Hang on. This can’t be the same woman. The previous girl was chained to a rock and about to drown. Why is she smiling? Is it that her savior has now arrived? Seemingly not, because he doesn’t seem to do anything to save her. He disappears back up the hill clutching a biro that appeared from nowhere.

It’s a shame, because I don’t like to admit when I’m beaten, but this is just too opaque for me. I have no real clue what is going on in this scene. The first few mistakes with sentence structure and head-hopping put me on notice that this is not written as well as it might be. I don’t think an agent would read further than that. I did, but I got lost in a confusing muddle of half-understood sentences. Not for me, I’m afraid. That said, if the grammar and structural problems were fixed up, it might appeal to some agents. It’s a subjective business, beyond the basics of good writing craft, so don’t ever send it to one agent and take their verdict as gospel.