Submissions for Where does the story start? – Page 2 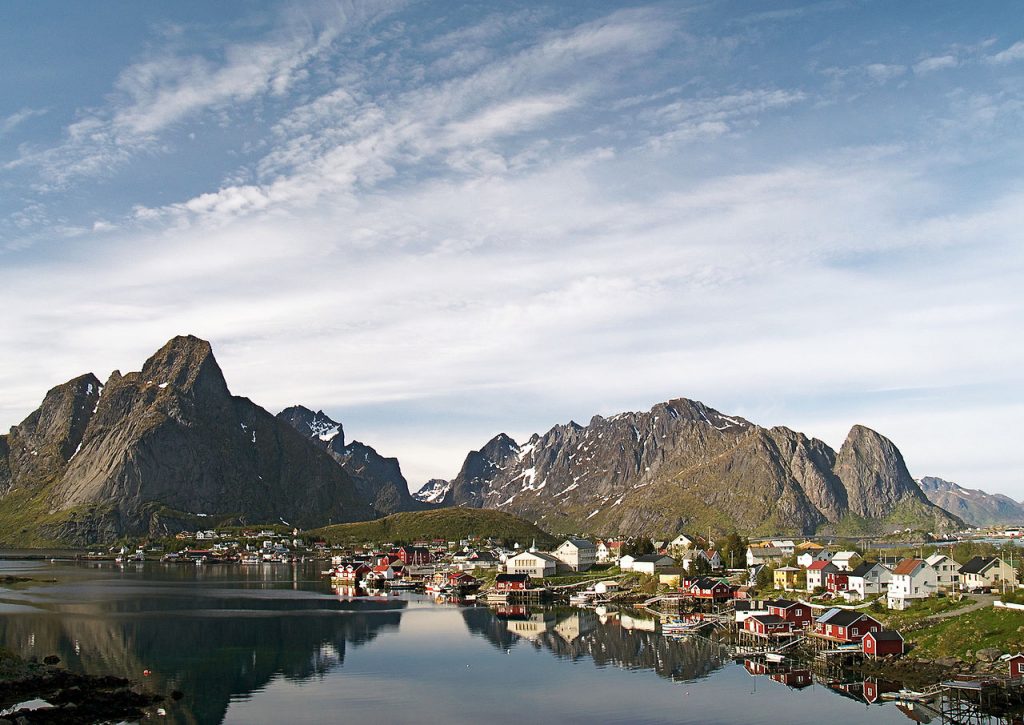 Amongst the most beautiful surroundings, the ugliest crimes are committed. Perhaps that should be the strapline of this scandi noir opening?

Title: Julebord (The Holiday Party) – Book II : A Story about Recent Events
Wordcount:120000 – 140000 (max.)
Genre: It’s complicated….?Whodunit?Noric Noir?Political Novel?Literary fiction?
Language: Written in the US by a non-native English speaker
Synopsis: Should chief investigator James Wiley Redding of the Norwegian Police suspect that any of the doctors working in the small rural hospital of Gudshus, located where a fjord meets the North Sea, might be linked to the gruesome discovery made on a December morning after their annual Julebord (Holiday Party)?

The ice cold of the salty water in his face finally awakened him fully. His headache was gone. He still felt strange. The sky just had started to turn from a pinkish-purple-violet to deep blue. It was the time of the year when the days start way too late and end too early. The sky was unusually clear, with only a few thin, high, white clouds – not the usual heavy boring grey of the long weeks before. The lull was over. The next one looked like it would be a heavy bomb. He was in the impact zone. He needed to start charging or he would end up getting caught inside. He turned around. He felt the light, crisp wind, which was blowing away from the faint sun which was barely rising above the glittering white of the glacier peaks and started to lower his body.

Earlier, he had woken up confused, way later than usual, to a bedroom filled with the artificial rays of his wakeup light. Yes, he had drunk two glasses of the French merlot at the Julebord last night and then some aquavit. After that everything blurred. He usually did not drink aquavit. He had no clue how he had gotten home. His mouth tasted awful. He was naked. The bed smelled of a perfume that he knew did not belong to Maria. He had smelled it yesterday, but never before. His head hurt. He heard the tone announcing a new message on his phone. The phone was still in the front pocket of his suit pants, which were in a pile next to the dresser, as if someone had dropped them there, sandwiched between his white shirt and the wrinkled dark blue dress jacket below. His boxer shorts and socks lay to one side. When he picked up his pants he saw that some of the buttons on his shirt were missing. There was a faint red stain next to the breast pocket. His dress shoes were lying at the foot of the bed. The sole of one of them was facing upward. It was covered with a thin layer of dried whitish-grey mud. It was still almost pitch dark outside. The phone screen showed 08:41. The message read:

‘Morning ! Wake up !!! G-Point in 30 minutes ????’ He had to be at work at 12:45. He noticed his second pillow lying on the floor, next to two buttons from his shirt. Nothing made sense. He had promised Eric to join him. Should he go ? He went to the bathroom. His eyes were burning but he could see clearly – he had not taken out his contacts at night.

He saw the red pigment on his face starring at him in the mirror. As if someone had rubbed it around. Frightened he quickly filled the palms of his hands with the warm water and lowered his face. He felt ashamed.

He brushed his teeth. His body urged him to shower. The hot water felt good on his skin. He saw his wetsuit hanging on the bathroom wall – still damp from the last short session after he got off work yesterday. After all, surfing was the reason he had chosen to live here. He craved the security of the familiar. He took the wetsuit off the hanger and squeezed himself into the thick black rubber as was his routine. The neoprene felt safe against his skin. There was an array of whitish-grey muddy footsteps on the brown tile in the hallway. The clock on the wall showed 09:12. His keychain was lying dropped carelessly on the floor. His light grey winter coat was hanging at its place, but in an unusual way. The yellowish stain on it smelled like puke. He put on his neoprene booties and gloves. Outside – after pulling the neoprene hood over his head – he could feel the cold air only on his face. He locked the door and hid the key. He walked down the outside stairs of the small modern building with its six apartments. His Tesla Model 3 was still plugged in, standing in the covered carport where he had left it the day before. He wished he could forget trying to remember. He loosened the straps and took his board from the roof-rack. The parking stalls were not paved and the gravel was whitish-grey, muddy and loose as if it had not frozen last night. He recalled the mud on the hallway tiles and his shoes. Just a hint of snow covered the yellow-green grass.  He took his board under his left arm and started to run towards the sea. As soon as he turned the corner of the house, he could see the waves through rows of crosses. The sailor graveyard stood next to the beach as a reminder that you should never forget to fear what you live for.

Lacking imagination, but capturing the essence, they had named the surf spot ‘THE GRAVEYARD’ or simply ‘G POINT’. He saw that Eric was already surfing. He quickly attached his leash    to his right leg. He felt warm. The waves were just right. He needed to feel the power of the ocean quickly after all this. He skipped his warmup and jumped right into the waves. Eric waved at him. As ice cold water seeped into the wetsuit, he felt the short sting of cold. The familiar reaction of his body calmed his mind. He paddled out to his spot.

“You’re late, man! Too much party last night?” Per sat down on his board, nodded to his best friend and stared westward to wait for his first wave.

The problem for me with this submission is that I had no idea he was surfing, in the first paragraph, until much later in the piece when the context becomes clear. That meant that the entire first paragraph was just confusing. It might be that if you’re familiar with surfing language it is immediately apparent, but I’m not a surfer, I’m afraid. Since there was nothing in the synopsis to indicate a strong link to surfing, I had no reason to think of it, so the opening was lost on me. (It also suffers from needing a paragraph break before “The lull was over,” because otherwise we assume that the lull refers to the cloud formations he’s talking about in the previous line. This is one of a number of copyediting issues in the piece.) This is one of those situations where engaging a panel of beta readers might be a good idea. These independent beta readers, who shouldn’t know you and have no prior knowledge of the book, for their objectivity’s sake, will read and give you their feedback. If a majority of them come to the same conclusion, then you have a problem. If none of them mention it, then it’s merely my issue, and you shouldn’t be worried.
So as putative agent, I read the first paragraph, didn’t understand it at all, and then went on to read the second, which narrates the story of someone waking up. As you will know if you’ve read a few of these submissions, one of my bugbears is people starting a book with a character waking up. At that point I would have put this submission down and moved on to the next one, so it’s a rejection from me, I’m afraid. Because I’m not really an agent, merely an editor helping authors understand what a good opening might be, I did read on.

I see what you’re doing with this long list of “breadcrumbs”, things that he finds odd about his surroundings—the perfume, the red marks on his face, the red stain on his shirt and the whitish mud on his shoes. You’re trying to engage the reader, get them to question the scene. This is great – it’s a good tactic to pique a reader’s curiousity. I just wonder if you’re not trying too hard to mystify them here. The list of things he finds odd when he wakes up does tend to go on, rather. There’s the things I mention above, and also fact that his coat isn’t quite right on its hook. his headache, his inability to remember what happened the night before, the buttons on his shirt missing and then found on the floor next to his second pillow etc. etc. And the really odd thing is that all of these oddities spark no reaction in him at all, apart from the fact that the marks on his face leave him ashamed. But even then, what he’s ashamed of isn’t mentioned. Now if this character is a psychopath, then his lack of emotion at all these things that he finds disturbing makes complete sense. But he’s not a psycho, because he feels ashamed (of something) in the bathroom, so that suggestion doesn’t really carry water.

By the end I’ve just been left confused rather than engaged by this opening. I don’t know who this character is. He’s

not the main character, presumably, because he is mentioned in the synopsis as chief investigator James Wiley Redding, and this surfer-dude self-identifies as “Per”. Is he the murderer? That would seem an odd choice, opening the book in the murderer’s point of view and thereby eliminating all the “whodunit” element. It’s all a bit confusing, which is a shame because I get the feeling there might be an interesting story here trying to get out. I would suggest redrafting this opening. Have a think about where the story actually begins, who is the main point of view character. Think less about trying to intrigue the reader and more about trying to engage the reader. Your reader wants to know who the story is actually about—who the main character is and what happens to them. The quicker you can get the reader engaged with that character, generally, the better.

The book Self-editing for self-publishers out now – a comprehensive how-to guide for editing your own writing.