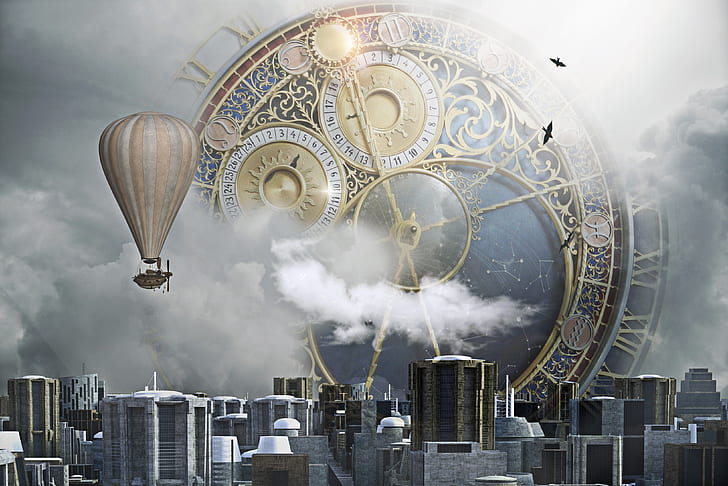 Not to be read if you have a phobia about clocks, or happen to be running late for an appointment! Sebastian endures summer holiday tribulations in an environment where running late has dire consequences.

Title: The Battle for Clocktown
Wordcount: 23,000
Genre: Childrens’ Middle grade
Language: British English
Synopsis: Sebastian Whitbread lives in Clocktown where life is controlled a gigantic Clock, owned by Billy Goldman. Sebastian’s main concern is survival. But this summer Sebastian must go to The Yard where children are at Johnny’s mercy. Intent on lying low Sebastian is lured into adventure with the reckless Sarah Silkenthread.

Sebastian eyes were glued onto the School End Clock willing it to ring out.  He was happy that tomorrow they would begin their summer holidays and these long, hot days of trying to make his brain work would be over for a while. But he was also worried. This was the first summer he would have to go to The Yard. He was old enough for it now but the thought of being “minded” by Johnny ‘Jawbreaker’ Goldman and his gang for a whole summer made his stomach flip over with dread. In fact, for the first time ever he hadn’t been able to sleep at night when Bed Clock rang and when Rise Clock boomed in the morning he was exhausted. He had tried to tell himself that all those stories he had heard couldn’t be true – could they?

At the shrill sound the children scraped their chairs back and began to gather their bags and coats.

“See you after the summer,” Mr. Trigg called out. “Have fun””

“Fun!” thought Sebastian; there wasn’t much chance of that. Glancing around at the other solemn children Sebastian could see that he wasn’t the only one worried about The Yard. Outside the school Johnny Jawbreaker was sitting on the wall with his gang of bully boys jeering at the younger children.

“Don’t be late tomorrow kiddies. No one had better be late. I have a special nasty treat for late kiddies.”

The sight of Johnny Jawbreaker made Sebastian feel sick and it wasn’t just from fear. Johnny Jawbreaker was disgusting. He towered over the other children. He had repeated two years in school so by now he was much older than the other boys and girls. His short, brown, spiky hair stood straight out from his head as though he had been electrocuted. His face was sour and sported a festering cluster of spots that he picked and prodded at all day long in class. It wasn’t unknown for Johnny to squeeze a spot carefully and then flick the yellow pus at some innocent victim. His nostrils seemed too large for his nose. You could nearly count the hairs in them but only when his finger wasn’t furrowing up there. The worst thing about Johnny was the smell and he seemed to relish the power of his stench. He loved to get younger kids in a headlock so that their noses were jammed right into his sweaty armpit. Whenever he spoke to you he made sure to stand too close so that there was no way to escape his rancid breath. Sebastian had often thought that in another world Johnny Jawbreaker would be a very unpopular boy. But this wasn’t another world. This was Johnny’s world and his father owned every bit of it.

When Johnny said “jump” you didn’t even ask “how high?”. You just jumped and you kept on jumping until he said “stop” or lost interest in you. He hadn’t earned the name “Jawbreaker” by helping old ladies across the road. Like all bullies Johnny had his gang of sneaky henchmen but when a beating had to be given out he did not shy away from the task.

Sebastian sighed heavily. As Billy Goldman’s son Johnny Jawbreaker could do what he liked and from tomorrow Sebastian would just have to figure out how to survive. Now he needed to get home to Benny and get his supper. Sebastian quickened his pace – he didn’t want to be late for his little brother. Oh no! It was no good being late.

The streets of Clocktown were busy with schoolchildren. Sebastian was glad that it wasn’t Home Clock though. That was when the town became frantic with the older people trying to get home to spend time with their families before Bed Clock.

Clocks were important in Clocktown. By law everyone had to wear a watch and children were taught how to tell the time before they were even taught to read. The importance of punctuality was also taught from a very young age and it was impressed on everyone that being late would lead to dire consequences. Sebastian did not know what these dire consequences were but he knew they would be bad. So bad in fact that nobody he knew had ever been late for anything. Sometimes Sebastian woke in the morning just before Rise Clock with a sick feeling, afraid that he had slept in. Of course, it was impossible for anyone to sleep through Rise Clock, or any of the other Clocks.

Billy Goldman had installed a giant Clock on the hill behind the town. At certain times during the day the Clock would rise up from the front of the hill, blocking the sunlight, and every street and building in town would vibrate with its harsh ring.

The strange thing was that although everything and everyone was always on time nobody seemed to have any time. Rise Clock became Lunch Clock then School End, Home and before you knew it Bed Clock rang out and the day was over again.

The residents of Clocktown spent their days rushing from home to work and back home again, all the while checking their watches, glancing nervously up at the giant Clock and keeping an ear cocked for the next ring. Sebastian often had the feeling that people weren’t really listening to him when he spoke so conscious were they of the minutes ticking by. At least he had some time to play with Benny between School End and Bed. That was his favourite time of the day and as he reached the nursery Sebastian’s heart lifted.

Congratulations on being the 100th submission to The Opening Lines! A bottle of champagne and an all-expenses paid trip to Honolulu for four … would be a lovely prize, but I don’t have the budget—sorry! On a serious note, thanks for all the first 100 authors who have endured the trials of having their work publicly picked over. I hope that it has been interesting and entertaining for everyone.

On to the submission:

Perhaps it’s my adult sensibilities, but I found this quite creepy! I think it’s the emphasis on clocks, everyone always checking the time, looking over their shoulders, watching deadlines, or perhaps it’s just Johnny Jawbreaker, the graphically described evil shadow looming over Sebastian’s summer holidays. For the more sensitive middle grader this could be quite an intimidating beginning—there’s not much jollity or frivolity about in Clocktown, certainly.

It’s clever, in that children tend to accept things the way they are without questioning. There’s no reason given for Billy Goldman’s hegemony over Clocktown. Why did he erect the clock? Why did the populace let him? Why are they all so fearful of him? Why do they obey the clock? What are the dire consequences for being late? Why does Sebastian have to go to The Yard, to be minded for the entirety of the summer break by Johnny? Where are his parents? All these are good questions raised by this beginning. Sebastian doesn’t answer them, or even raise them, right now, but hopefully he does by the end of the book.

There are a couple of tiny details which make me think this isn’t perfect just yet. The beginning is quite slow. Sebastian does tend to stop in mid-action and ruminate on the injustices of his life. Much of the first paragraph is taken up with Sebastian worrying about The Yard. It’s a narrator telling us he’s worrying about The Yard, not Sebastian himself “This was the first summer he would have to go to The Yard.” Just at that moment he probably isn’t thinking that, because the School End Clock is about to sound to mark the beginning of the summer holidays, and that would seem to be a significantly joyous moment for any child, no matter what uncertain future lies ahead. Even if he were, perhaps it could be brought into a much closer PoV, to make us dread it with him instead of merely being told about it. Or perhaps he is actually dreading this moment this time around. For most children, that would be really puzzling and engaging. “Why on earth is he dreading the end of summer term?” your ten-year-old reader would be wondering. Make the reader dread it too, don’t just tell them how dreadful it is.

I wonder about the slapstick description of Johnny Jawbreaker. It reads rather like a list. He has his spiky hair. He has his spots. Then he has his large nostrils, his BO, his jawbreaking propensity. It almost sounds like a description of the Gruffalo (“… and purple spikes all down his back…”). You might be right, and that block of graphic description is still appropriate for your readership, but it sounds to me as if it belongs in a younger child’s book (not Johnny Jawbreaker as a character, obviously—he sounds horrific, he’d give eight-year-olds nightmares—but the “he had this” and “he had that” description).

The last thing is the propensity to worldbuild in the Clocktown section. You do tend to go through how it all works item by item. I’m not sure you need to, or that this is appropriate at this stage. I’m thinking of The Windsinger series by William Nicholson, where there is a quite complicated caste system and a city dominated by this strange edifice in the middle. We only learn about all the details and how the city works and the significance of the Windsinger itself bit by bit, as we need to. I wonder if that might not be a better approach here? That way we get to Benny a bit quicker, and presumably the two lads can have a conversation about the coming holidays and their plans. I’m conscious of the fact that there are only two lines of dialogue in this first 1000 words, and both of those are declamatory sentences that aren’t answered.

It’s good, but I’m just not sure it’s the best it can be in this iteration. A rejection would be harsh, but I’m not sure I’d recommend going to an agent as it stands.